This condition takes its name from the comparable human condition, metabolic syndrome.  It is a complex, multi-factorial problem involving numerous body systems.  In humans it increases the risk of stroke, heart attack, diabetes and other potentially serious medical disorders.  In horses, it is also known as Peripheral Cushingoid Syndrome because some of the signs are similar to those seen in Cushing's disease.  However, we now know that horses with EMS do not have abnormalities of the pituitary or adrenal glands, unlike horses that are affected by true Cushing's disease. 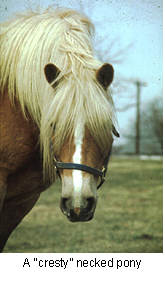 Obesity is an increasing problem for horses, as for human beings.  Fat cells are found mainly in the tissues under the skin, between muscles and within the abdomen.  Recent research has shown that the abdominal fat cells are capable of acting like an endocrine (hormone producing) gland and recycle particular hormones that would otherwise become inactive substances.  The most significant hormone recycled by these fat cells is cortisol.  If this occurs it results in higher than normal levels of cortisol in the circulation for prolonged periods of time.  Chronically high cortisol levels result in persistently high blood glucose levels.  The high blood glucose levels stimulate the production of insulin resulting in a concurrent persistent high blood level of insulin.  The main role of insulin in the body is to encourage the uptake of glucose from the blood into cells where it can be either used or stored for energy.  Animals with EMS develop an 'insulin resistance' that means that their blood glucose level never or rarely returns to normal in spite of the high insulin levels in the body.  The elevated blood glucose level results in hypertension (increased blood pressure) and elevated blood triglycerides (fats), among other metabolic disorders.  In humans this results in the development of type II diabetes but this does not appear to happen in the horse.  However, horses do develop a glucotoxicity that mainly affects the endothelial (lining) cells of small blood vessels resulting in their narrowing and causing vasoconstriction and an increased risk of blood clotting (thrombosis).  A combination of these factors results in a significant increase in the risk of laminitis, following vasoconstriction and thrombosis in the small blood vessels of the hoof laminae.

Ponies are more commonly affected than horses because they are less tolerant of high blood glucose levels. Often the only sign is obesity although this is not always the case.  The typical EMS case is an overweight pony that appears to 'live on air'.  The characteristic 'cresty' neck and 'lump rump' is familiar to all of us.  Such cases often appear lethargic.  Some may have clinical signs of acute laminitis with severe foot pain but many will have low-grade or unapparent (sub-clinical) degrees of laminitis.  If examined carefully, these ponies may have divergent hoof rings and a widening of the white line to indicate that changes have occurred in the foot.  Some cases will have convex soles and pain on digital pressure to the sole.  There may be radiographic (x-ray) evidence of rotation of the pedal bone and/or remodelling of the tip of the pedal bone associated with long standing laminitic changes.  Other clinical signs that may occur include increased urinary production and water intake (polyuria/polydipsia).  Horses and ponies of any age can be affected but the very young and very old appear to be less susceptible.  Broodmares that suffer with EMS may not cycle properly. 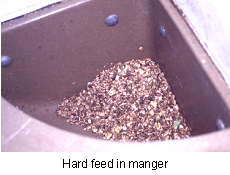 How is the diagnosis of EMS confirmed?

The precise diagnosis of EMS is not straightforward as many chronically stressful conditions that increase cortisol production can result in glucotoxicity.  Consequently the horse or pony with acute painful laminitis might have elevated levels of cortisol, glucose and insulin that are secondary to the laminitis rather than being the cause of it.  Other conditions such as hyperthyroidism and true Cushing's disease (pituitary pars intermedia dysfunction) should be ruled out when attempting to confirm a diagnosis of EMS.  Blood tests need to be done. High fasting insulin levels combined with a high or normal blood glucose level may suggest EMS.  An intravenous glucose tolerance test can be performed but other conditions may give similar results to EMS.

How is EMS treated and can it be prevented?

It is important to treat acute laminitis appropriately with rest, analgesics (phenylbutazone, flunixin etc.), vasodilating agents (ACP) and appropriate foot care such as digital support and corrective trimming.  Cases that can be exercised should receive increasing levels in an attempt to encourage weight loss.  This should be combined with a low energy diet that consists of medium to low digestibility ingredients.  Highly soluble carbohydrate sources such as oats and corn should be avoided, as should high fat rations.  The addition of antioxidants in the form of Vitamin E may be beneficial and there is some evidence to suggest that manganese may help improve the activity of insulin.  Treatment with certain medications used to treat cancer in humans (e.g., trilostan) has been attempted but results are currently inconsistent.  Once cases have lost weight and regained an appropriate level of fitness the problem tends to resolve itself, although those that have had significant laminitis may require constant and recurrent attention to their feet, thereafter.

Where to Find Us