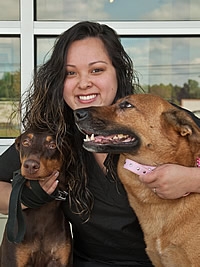 Joanne started at Huffard Animal Hospital as an animal technician and realized that she wanted to become an animal groomer. Joanne attended the Nanhall Porfessional school of dog grooming in the winter of 2011 and started grooming with us in June of 2011. She loves animals and enjoys making them look and smell nice and loves seeing the owner’s expressions when they see their beautifully groomed pets. She has two pets of her own, a shepherd lab mix named Angel and a Doberman Pinscher named Shyla. She loves to take them to play dates with her friends dogs, watching the silly things they all do together.